Canada is the second largest country on earth 10 million square kilometers. Three oceans line Canada's frontiers: the Pacific Ocean in the west, the Atlantic Ocean in the east, and the Arctic Ocean to the north.

Along the southern edge of Canada lies the Canada-United States boundary. Both Canada and the U.S.A are committed to a safe, secure and efficient frontier.

The Regions of Canada

Ottawa, located on the Ottawa River, was chosen as the capital in 1857 by Queen Victoria, the great-great-grandmother of Queen Elizabeth II.

Each province and territory has its own capital city. You should know the capital of your province or territory as well as that of Canada.

Canada has a population of about 34 million people. While the majority live in cities, Canadians also live in small towns, rural areas and everywhere in between.

Atlantic Canada's coasts and natural resources, including fishing, farming, forestry, and mining, have made these provinces an important part of Canada's history and development. The Atlantic Ocean brings cool winters and cool humid summers. Newfoundland and Labrador is the most easterly point in North America and has its own time zone. In addition to its natural beauty, the province has a unique heritage linked to the sea. The oldest colony of the British Empire and a strategic prize in Canada's early history, the province has long been known for its fisheries, coastal fishing villages and distinct culture. Today off-shore oil and gas extraction contributes a substantial part of the economy. Labrador also has immense hydro-electric resources. Prince Edward Island (P.E.I.) is the smallest province, known for its beaches, red soil and agriculture, especially potatoes. P.E.I. is the birthplace of Confederation, connected to mainland Canada by one of the longest continuous multi-span bridges in the world, the Confederation Bridge. Anne of Green Gables, set in P.E.I. by Lucy Maud Montgomery, is a much-loved story about the adventures of a little red-headed orphan girl.

Nova Scotia is the most populous Atlantic Province, with a rich history as the gateway to Canada. Known for the world's highest in the Bay

of Fundy, the province's identity is linked to shipbuilding, fisheries, and shipping. As Canada's largest east coast port, deep-water and ice-free, the capital, Halifax, has played an important role in Atlantic trade and defense and is home to Canada's largest naval base. Nova Scotia has a long history of coal mining, forestry, and agriculture. Today there is also off-shore oil and gas exploration. The province's Celtic and Gaelic traditions sustain a vibrant culture. Nova Scotia is home to over 700 annual festivals, including the spectacular military tattoo in Halifax. 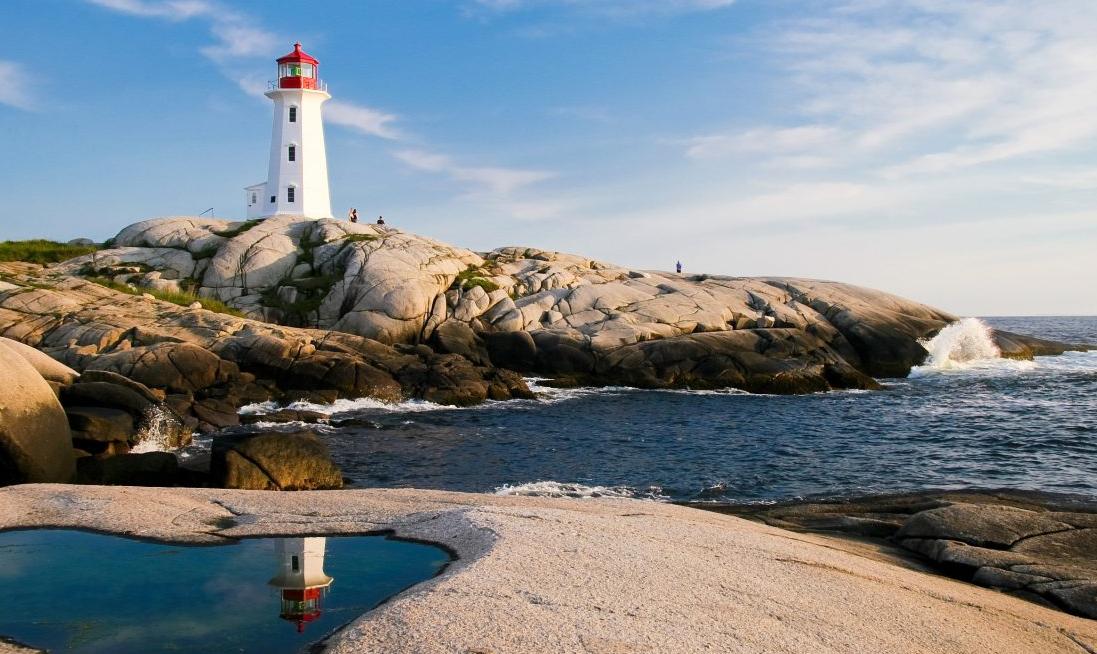 Situated in the Appalachian Range, the province was founded by the United Empire Loyalists and has the second largest river system on N

orth America's Atlantic coastline, the St. John River system. Forestry, agriculture, fisheries, mining, food processing, and tourism are the principal industries. Saint John is the largest city, port, and manufacturing centre. Moncton is the principal Francophone Acadian centre; and Fredericton, the historic capital. New Brunswick is the only officially bilingual province and about one-third of the population lines and works in French. The province's pioneer Loyalist and French cultural heritage and history come alive in street festivals and traditional music. 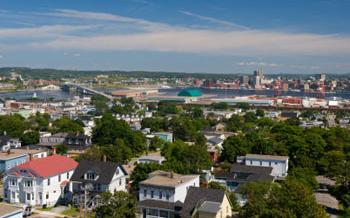 More than half the people in Canada live in cities and towns near the Great Lakes and the St. Lawrence River in southern Quebec and Ontario, known as Central Canada and the industrial and manufacturing heartland. Southern Ontario and Quebec have cold winters and warm humid summers. Together, Ontario and Quebec produce more than three-quarters of all Canadian manufactured goods. 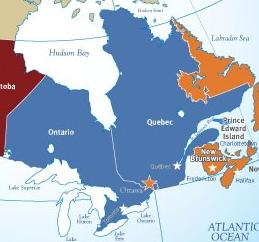 Nearly eight million people live in Quebec, the vast majority along or near the St. Lawrence River. More than three-quarters speak French as th

eir first language. The resources of the Canadian Shield have helped Quebec to develop important industries, including forestry, energy, and mining. Quebec is Canada's main producer of pulp and paper. The province's huge supply of fresh water has made it Canada's largest producer of hydro-electricity. Quebecers are leaders in cutting-edge industries such as pharmaceuticals and aeronautics. Quebec films, music, literary works, and food have international stature, especially in La Francophonie, an association of French-speaking nations. Montreal, Canada's second largest city and the second largest mainly French-speaking city in the world after Paris, is famous for its cultural diversity.

At more than 12 million, the people of Ontario make up more than one-third of Canadians. The large and culturally diverse population, natural resou

rces and strategic location contribute to a vital economy. Toronto is the largest city in Canada and the country's main financial centre. Many people work in the service or manufacturing industries, which produce a large percentage of Canada's exports. The Niagara region is known for its vineyards, wines and fruit crops. Ontario farmers raise dairy and beef cattle, poultry, and vegetable and grain crops. Founded by United Empire Loyalists, Ontario also has the largest French-speaking population outside of Quebec, with a proud history of preserving their language and culture. There are five Great Lakes located between Ontario and the United States: Lake Ontario, Lake Erie, Lake Huron, Lake Michigan (in the U.S.A.) and Lake Superior, the largest freshwater lake in the world. 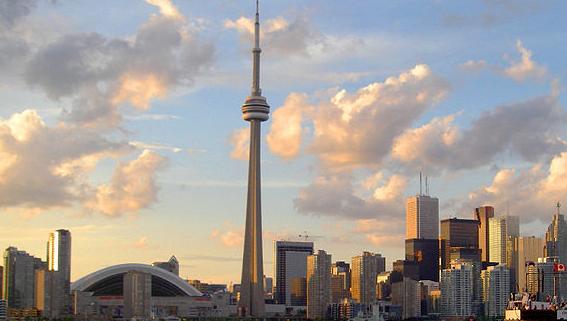 Manitoba, Saskatchewan, and Alberta are the Prairie Provinces, rich in energy resources and some of the most fertile farmland in the world. The region is mostly dry, with cold winters and hot summers. 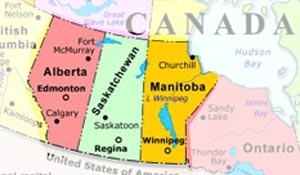 Manitoba's economy is based on agriculture, mining, and hydro-electric power generation. The province's most populous city is Winnipeg, whose Exchange District includes the most famous street intersection in Canada, Portage, and Main. Winnipeg's French Quarter, St.

Boniface, has Western Canada's largest Francophone community at 45,000. Manitoba is also an important centre of Ukrainian culture, with 14% reporting Ukrainian origins and the largest Aboriginal population of any province, at over 15%. Saskatchewan, once known as the "breadbasket of the world" and the "wheat province," has 40% of the arable land in Canada and is the count

ry's largest producer of grains and oilseeds. It also boasts the world's richest deposits of uranium and potash, used in fertilizer, and produces oil and natural gas.

Regina, the capital, is home to the training academy of the Royal Canadian Mounted Police. Saskatoon, the largest city, is the headquarters of the mining industry and an important educational, research and technology centre. 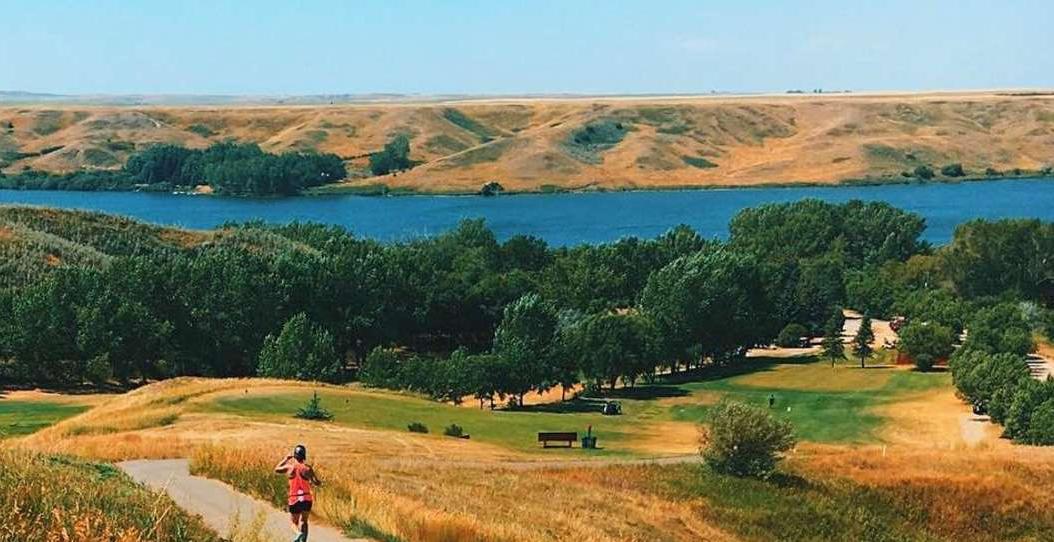 Alberta is the most populous Prairie province. The province and the world-famous Lake Louise in the Rocky Mountains were both named after Princess Louise Caroline Alberta, the fourth daughter of Queen Victoria. Alberta has five national parks, including Banff National Park,

established in 1885. The rugged Badlands house some of the world's richest deposits of prehistoric fossils and dinosaur finds. Alberta is the largest producer of oil and gas, and the oil sands in the north are being developed as a major energy source. Alberta is also renowned for agriculture, especially for the vast cattle ranches that make Canada one of the world's major before producers. 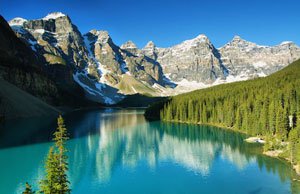 British Columbia is known for its majestic mountains and as Canada's Pacific gateway. The Port of Vancouver, Canada's largest and busiest, handles billions of dollars in goods traded around the world.

Warm airstreams from the Pacific Ocean give the B.C. coast a temperate climate. 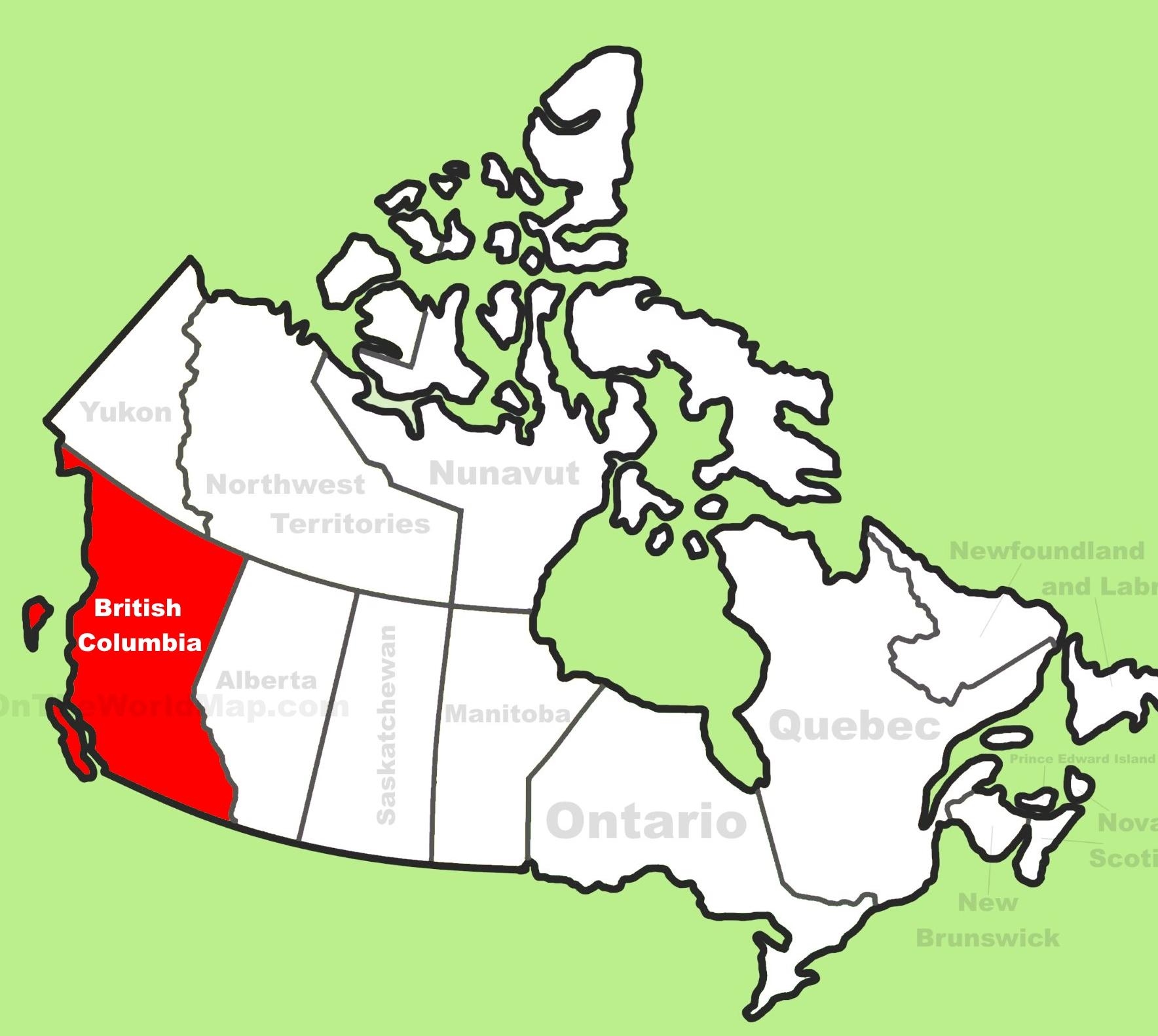 British Columbia (B.C), on the Pacific coast, is Canada's westernmost province,  with a population of four million. The Port of Vancouver is our gateway

to the Asia-Pacific. About one-half of all the goods produced in B.C. are forestry products, including lumber, newsprint, and pulp and paper products the most valuable forestry industry in Canada.B.C. has the most extensive park system in Canada, with approximately 600 provincial parks. The province's large Asian communities have made Chinese and Punjabi the most spoken languages in the cities after English. The capital, Victoria, is a tourist centre and headquarters of the Navy's Pacific fleet.

The Northern Territories, Nunavut, and Yukon contain one-third of Canada's land mass but have a population of only 100,000. There are gold, lead, copper, diamond and zinc mines. Oil and gas deposits are being developed. The North is often referred to as the "Land of the Midnight Sun" because, at the height of summer, daylight can last up to 24 hours. In winter, the sun disappears and darkness sets in for three months. The Northern territories have long cold winters and short cool summer. Much of the North is made up of tundra, the vast rocky Arctic plain. Because of the cold Arctic climate, there are no trees on the tundra and the soil is permanently frozen. Some continue to earn a living by hunting, fishing and trapping. Inuit art is sold throughout Canada and around the world. 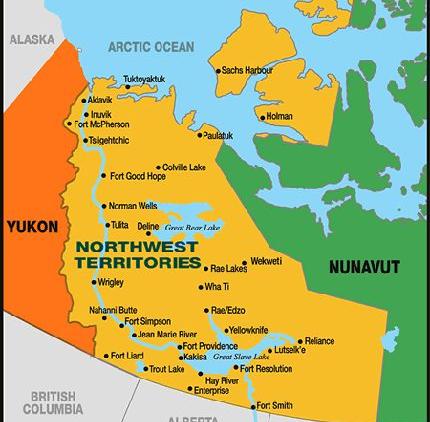 Thousands of miners came to the Yukon during the Gold Rush of the 1890s, as celebrated in the poetry of Robert W. Service. Mining remains a

significant part of the economy. The White Pass and Yukon Railway opened from Skagway in neighboring Alaska to the territorial capital, Whitehorse, in 1900 and provides a spectacular tourist excursion across precipitous passes and bridges. Yukon holds the record for the coldest temperature ever recorded in Canada (-63°C).

The    Northwest Territories (N.W.Y.) were originally made up in 1870 from Rupert's Land and the North-Western Territory. The capital, Yellowknife

(population 20,000) is called the "diamond capital of North America." More than half the population is Aboriginal ( Dene, Inuit, and Métis). The Mackenzie River, at 4,200 kilometers, is the second-longest river system in North America after the Mississippi and drains an area of  1.8 million square kilometers. 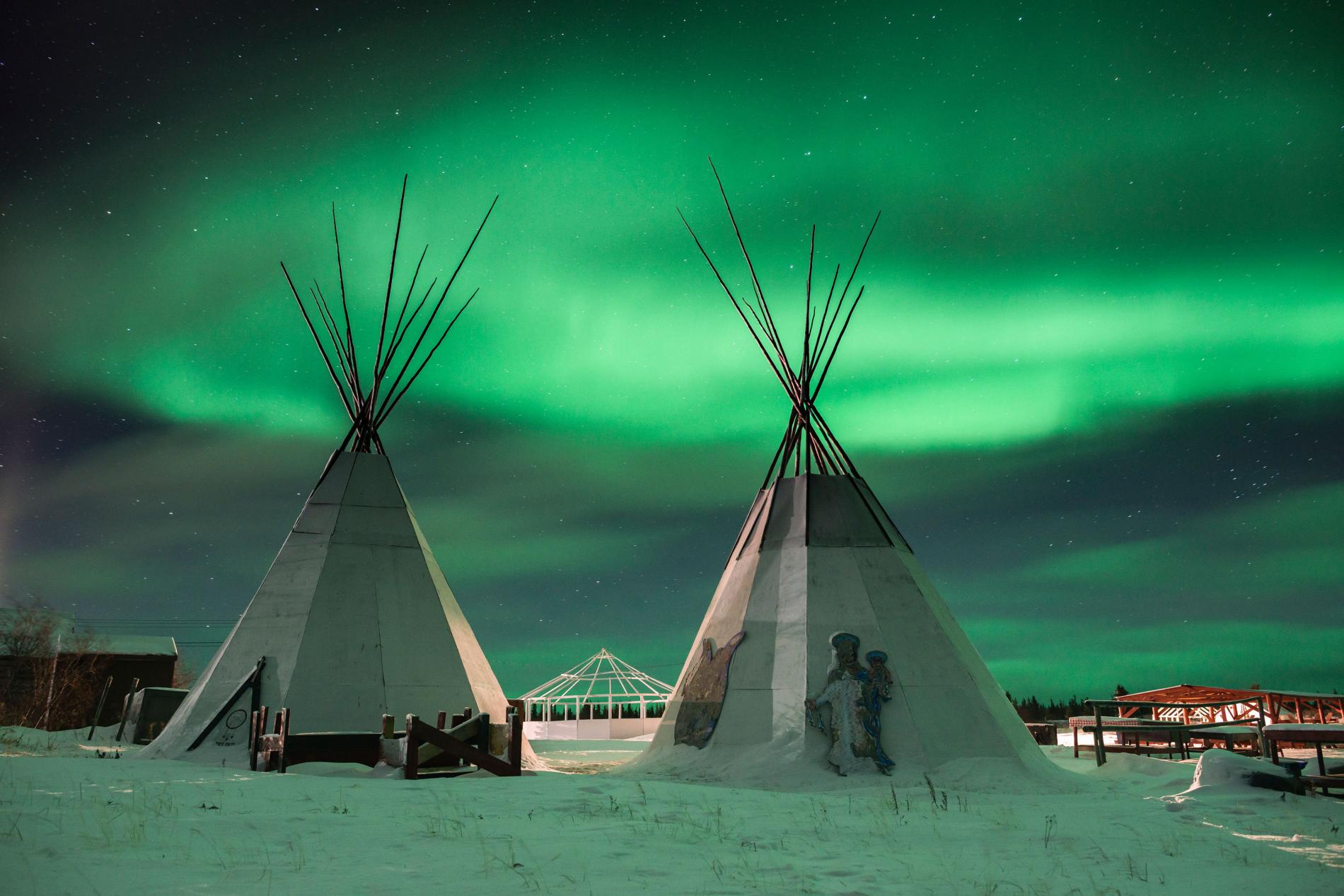 Nunavut, meaning "our land" in Inuktitut, was established in 1999 from the eastern part of the Northwest Territories, including all of the former District of

Keewatin. The capital is Iqaluit, formerly Frobisher Bay, named after the English explorer Martin Frobisher, who penetrated the uncharted Arctic for Queen Elizabeth in 1576. The 19-member Legislative Assembly chooses a premier and ministers by consensus.

The population is about 85% Inuit, and Inuktitut is an official language and the first language in school. Canada's vast North brings security and sovereignty challenges. Dealing with harsh weather conditions in an isolated region, the Canadian Rangers, part of the Canadian Forces Reserves travel by snowmobile in the winter and all-terrain vehicles in the summer from Resolute to the Magnetic North Pole and keep the flag flying in Canada's Arctic. Do you want to be here?

Write to us to know how. You will be exposed to all the public who is willing to come to Canada.

If you are outside of Canada and need to call CIC Call Center.

Katapulta is the project that will help you to visit, study, work or live in Canada.

We share information on many cities in Canada, how to write a proper resume, the process of obtaining or getting certain documents for Canada, myths and facts and much more information coming from experience or common questions.

Powered by OKay
© 2018 - 2022 OKay Inc
The information presented here is for your convenience. Please note that the last word is in the official website of the Government of Canada.